Who or what inspires you?
Music- garage, metal, punk…And movies- filmmakers like Michael Haneke and Lucas Moodysson, writers like Elfride Jelinek and Michel Houllebecq, grafic novelists like Will Eisner,Charles Burnes, Peter Pontiac, Bernie Wrightson and a lot of other visual artists.
Do you have any role models/icons?
An icon? That would be Elfride Jelinek, I guess. But as role model she is way out of my league.
Almost every artist has a special “mission”, a message they want to deliver or actions they want to provoke with their work. What’s your mission?
That’s a tough one. If I knew what the exact message was I don’t think there would be a need to make the work anymore…
But, If I must, shortly: The message would be that life’s a bitch, and my mission to sort out who or what’s to blame. Without any result so far.
Your artworks often feature children in a context of violence, dirt and sex – they don’t fail in provoking unease and disgust in the viewer. How were your personal feelings during the working process?
I can get emotional or upset, but not all of the time. A single piece takes severeal months to make so that would be rather unpleasant. Sometimes I enjoy working on it  in a malicious kind of way, but mostly I’m preoccupied with formal and technical issues.
Do those images come from personal experiences (e.g. travels to third world countries) or are they a product of your imagination / from watching the news / from listening to stories from friends/acquaintances?
It depends; some works are inspired by watching the news, some by disastermovies, some by everyday life: You don’t have to travel to a third world country to see people suffer. But mostly the images arise from the working process itself.
It’s not just about what you see, but what it stands for. I’m always looking for images that can also serve as a metaphor. And of course the themes I choose orginate in personal experience, like with any other artist.
Which materials do you use and why?
I use lightweight, waterbased acrylics like fabric hardeners and wood-paste so I can work without masks and gloves, and handle the sculptures myself without getting a hernia. It’s better for me and better for the rest of the environnement.
How does your personal background afflict your choice of materials and the general aesthetics of your artwort? (At the first glance, the children look like old, somehow kitschy toys for me)
That right. I grew up with these toys and figurines and still love ’em. But I’m also interested in nowadays toys. I have a beautilful collection. What more can I say about it?

Life sucks, Falling Angel, Dope, Statue of Liberty, and Last Frontier especially caught my eye. Could you please comment briefly on the initial idea for each artwork, their development (maybe you had an idea, but it developed in a completely different direction than you thought?), and people’s reactions to some of them? (Do you care about people’s reactions at all? Or not so much?) 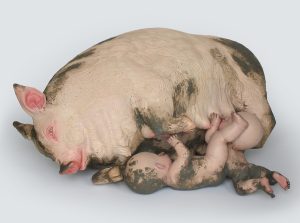 Life Sucks
It’s a modern day Romulus and Remus (founders of Rome) kind of image. They were raised by wolves, this one is about being raised by pigs. And it’s also about the exploitation of animals. 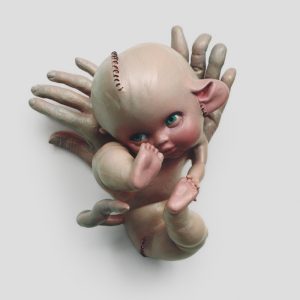 Falling Angel
I’m a bit clumsy and cut myself frequently while working. By the time I made that one I almost cut off my thumb with a hobbyknife. Made me think about the importance of keeping one’s hands undamaged. That was the initial motivation. It turned out a sort of gothic church ornament, with hands for wings. 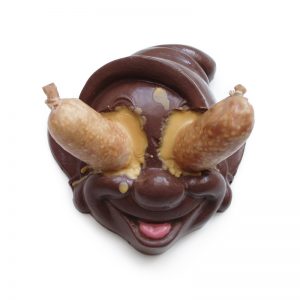 Dope
I made that one in 1994. I really don’t remember too much about it….it’s  far too long ago!What you say about having an idea to start with, but the work evolving in a different direction is true and by the time it’s finished, I’ve often forgotten about the initial idea already. And after a couple of years it has become quite irrelevant what motivated the work in the first place. You’re supposed to leave things behind you, right? It’s just what you see that remains. So it’s not really important whether you feel you’re understood or not….I do care however about how people respond to the work: I’d like them to be moved in some way, preferably positive, but if they’re angry or put off that’s okay as well. 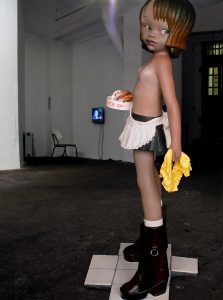 Statue of Liberty
That one was literally taken from a documentary about sextourism in Thailand, filmed with a hidden camera. I added nothing except for the hamburger and the ashtray that says “Have a Nice Day”. The children in the documentary were even younger than the girl in the sculpture and it really got me upset. The work is not about sex, though, it’s about consumerism and poverty. 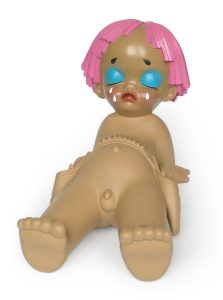 Last Frontier
It’s more cartoony than most of the work, much closer to the 70ties toys it’s inspired by. Some of these toys are quite racist or depict children in a way that at the present time definitely would raise some eyebrows..I was trying to underline that aspect.

If you could choose one superpower, what would that be? (no idea where that came from, I’d just really like to know)
Ha, ha! That’s real childish!
When I was young I used to identify with Sissy Spacek as the “Carrie” character in the Brian De Palma movie (based on a Stephen King novel). She’s a firestarter: when pushed too far everything around her goes up in flames. I found that very appealing at the time, but got over it. I think.

You mentioned Elfriede Jelinek as one of your icons. What do you especially like/admire about her?
The way she combines the intellectual and the vulgar, I guess.
And the fact that every novel she writes is totally different from the former, it always deals with important issues and leaves you with no illusions whatsoever…
“Die Kinder der Toten” is an absolute masterpiece, apart from the fact that it’s got so many layers and references, it’s very musical and completely obscene and gory.

What are your projects for the future? Any exhibitions? Travel plans etc?
I’m currently working on a show that’s supposed to take place this fall, at the Witzenhausen Gallery in New York. I’d very much like to work in New York for a year or so and trying to realise that.